Components, spare parts and accessories for coaches and buses 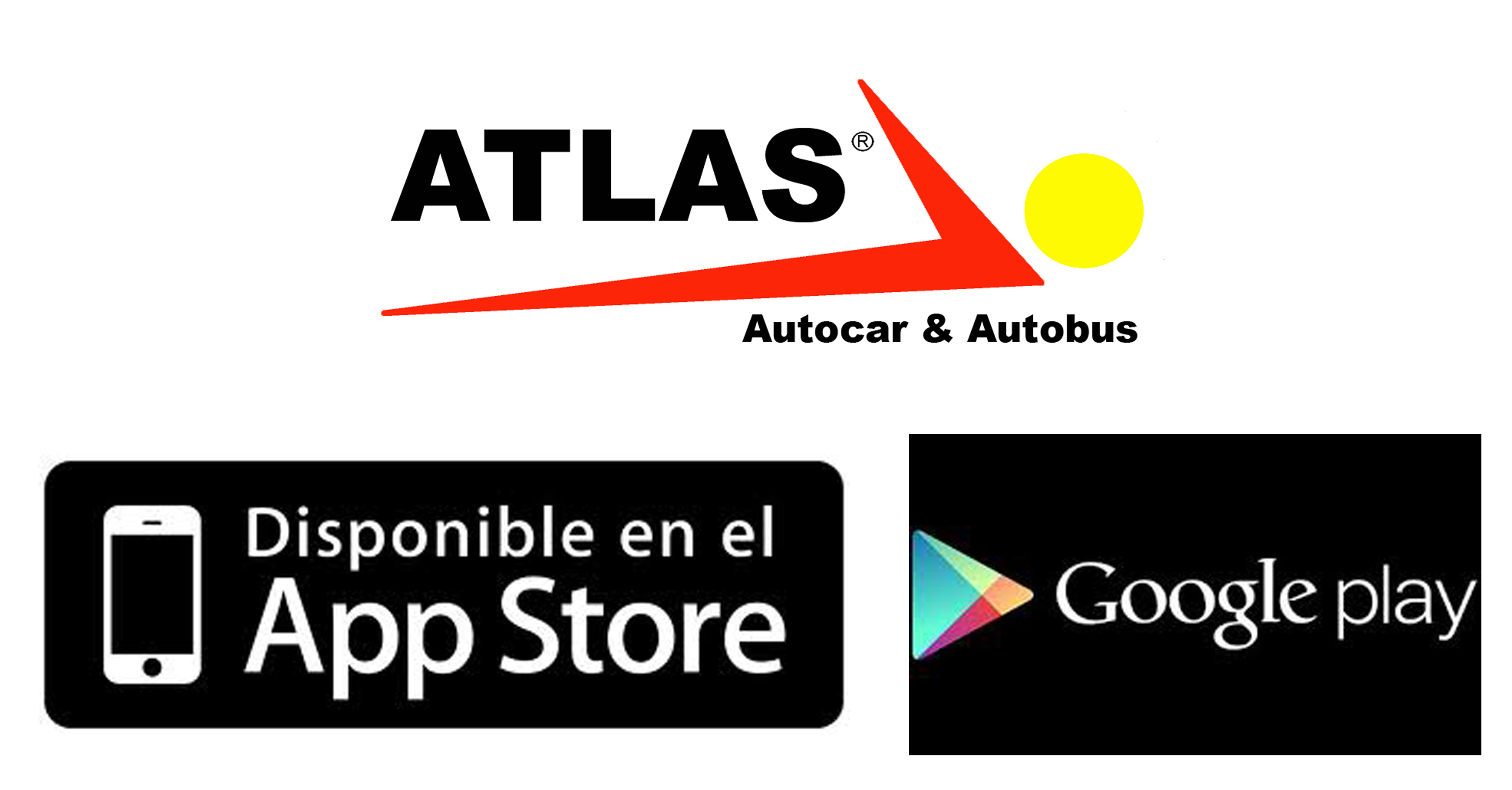 Euroliners is established in Spain after being acquired by Atlas Bus. 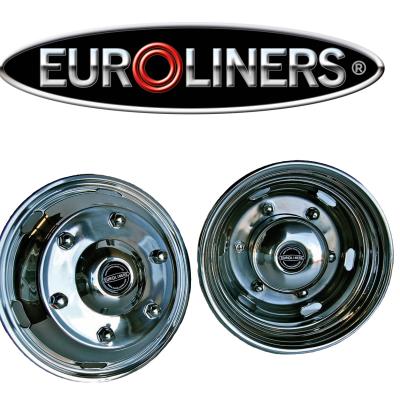 The British brand leader in simulator wheel covers Euroliners, has been acquired by Atlas Bus. Atlas had been working with them for 12 years, and being the main distributor for Euroliners, "it was the best choice" says the previous owner, Pepa Smith, director of WAM.
The factors behind the deal included Brexit and Covid pandemic. Structural changes at WAM (Wheel and Motion) required relocation from the UK to Europe. Atlas Bus’ product knowledge and distribution network matched Euroliners' needs. The brand will continue to operate independently, retaining and even expanding its European distributor network. As well as its R&D department, which will continue the development of new covers lines. Atlas bus will continue to be responsible for the Iberian Peninsula market.

New catalog 22-23 in French and English. 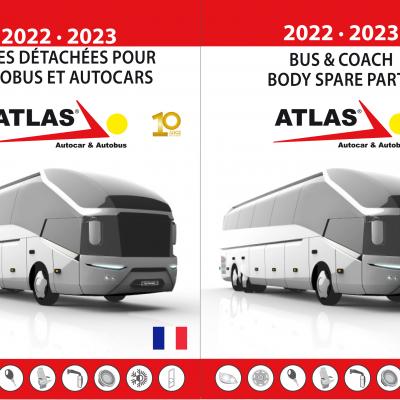 New catalog 22-23 in French and English. Available on our website and our apps. 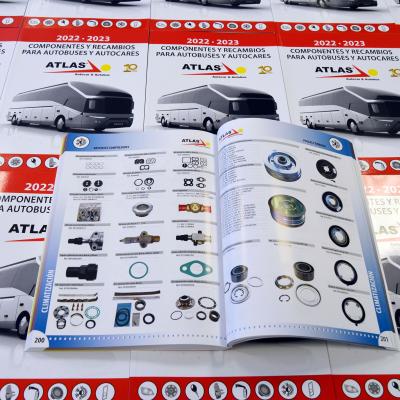 Atlas Bus publishes a new catalogue of spare parts. The Spanish company postponed the presentation scheduled for 2020 due to the Covid-19 pandemic. Due to the epidemiological situation, the market was not at all in the best moment to receive this new issue. Meanwhile, the catalogue was further optimized and updated to give it a greater projection and content, extending its validity to the years 2022 and 2023. The company is very satisfied with the result, as it includes many new highly frequently demanded references, as well as alternatives to OEM products. Among the latest news also includes the products related to Covid-19, protection or elimination measures.
An English and French version will also be published shortly.
The catalogue will be available in a printed version and a digital version in PDF for all the society platforms such as the website atlasautobus.com, Atlas Bus App and E-commerce. #atlasbus #atlas

Atlas Bus continues to aim for internationalization, opening its first warehouse in Portugal 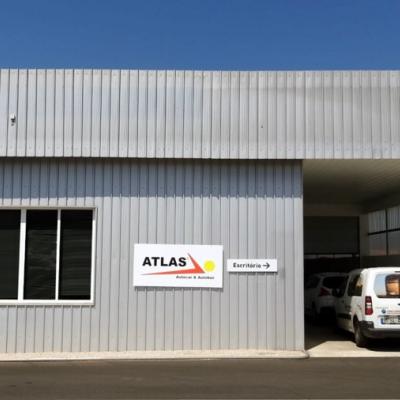 Atlas Bus closed the year 2018 with a record level in its history, the company has consolidated strongly in the Portuguese markets, with the latter contributing 16% growth. In order to continue strengthening synergies its director has decided to open a new warehouse as a delegation in Coímbra managed by Paulo Gomes.

Atlas Bus bets on this area with the objective of being the main reference of the Portuguese market. We`ll have a large stock “the most requested spare parts”, components and accessories for coaches and buses; as well as the latest news on the market.

With this investment we will improve our logistics, we`ll roughly have 10.000 references, the warehouse has 200 mt2. Customers are at the very heart of Atlas Bus, and with the start-up of the new warehouse we`ll personalize the relationship with our customers, sending their orders in an accurate and timely manner. The delivery time will be improved as ‘a value added service’. 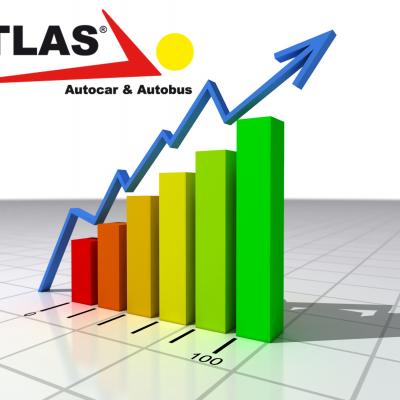 Atlas Bus closed the year 2018 with a record level in its history, reaching 8.9 million euros, an excellent results considering that the sector average has been contained. The company has consolidated strongly in the National and Portuguese markets, with the latter contributing 16% growth. The general export grew by 15%.
The company has major projects for the year 2019, and the incorporation of distributions such as Eberspächer Sütrak and Brusa, are a great incentive and motivation to continue in this sense.
From the Management and the Atlas team, all customers and suppliers are thanked for their commitment to the company. 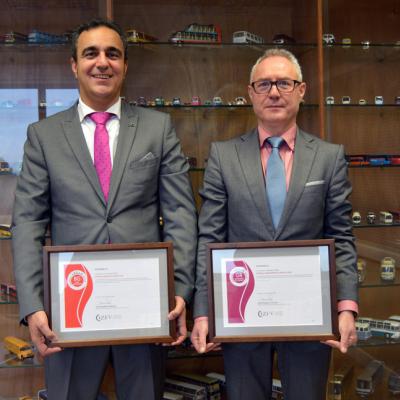 Atlas Bus continues receiving Ardán awards in 2018.
The Spanish company, based in Galicia, is getting more recognition with two new Ardán awards. ZFV (Zona Franca de Vigo), responsible for the evaluation of more than 27,000 Galician companies. For this, an exhaustive follow-up is carried out over 3 years, taking parameters obtained from reliable databases such as the commercial register.
The Certificates on this occasion are two, the one of Generadora de Riqueza, and the one already obtained one year before Company Bien Gestionada. The awards ceremony was attended by Jaime González Danoz, Manager and David Pereira Cividanes, Director of Atlas Bus.
These awards motivate the brilliant Atlas team, as it is a great reward for the constant efforts of work, innovation and service. Atlas Bus thanks customers, suppliers and their own team for their support in achieving this goal and continues to be a leader in their sector. 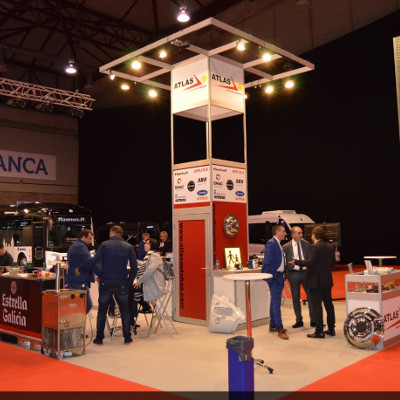 The first edition of the bus and coach trade Show, Expobus Iberia 2018 was held on November 9 and 10, 2010. The second national Show, with the aim of continuing as a reference and international exhibition. The meeting point was at the Silleda, in the Silleda International Exhibition Center (FSV), a well-equipped exhibition center for large trade Fairs, with good connection to the three Galician airports as well as access to the main road communication networks. Inaugurated by the president of the Xunta de Galicia, Mr. Alberto Núñez Feijóo.

Atlas Bus, as a Galician reference company of the sector, could not miss. The stand was one of the busiest since almost all visitors are customers of the company. New brands of representation have been presented, such as Eberspächer Sütrak, a prestigious German air-conditioning company, which will be represented by the aftermarket from 1 January 2019. Brusa has also called on Atlas Bus as a partner to manage Aftermarket spare parts and guarantee inventory management.

At the product level, we presented the Bi-LED headlamps (in both functions: high beam and low beam) dimensions 90 mm, wireless cordless phone chargers, USB surface chargers, Eberspächer Sutrak pre-heater with low consumption and high efficiency, seats Brusa Extend 300 and Create 120 KF, as well as a new seat leg made in magnesium aluminum that achieve reduce to 5 kg per pair of seats.

Another great attraction of the stand was the catering, made up of Galician products such as ham from La Cañiza, cheese from Tetilla Queinaga, bread from Silleda and the beer Estrella Galicia 1906, which pleased customers and friends.

The company was pleasantly satisfied with the event and its richness, which was an excellent opportunity to strengthen the links with customers and to present information of great interest. According to the data, the total number of visits during these two days was around 1000 people, with an international percentage of 20%, mainly from Portugal, our neighboring country.

ATLAS MOVES ITS DELEGATION OF MADRID 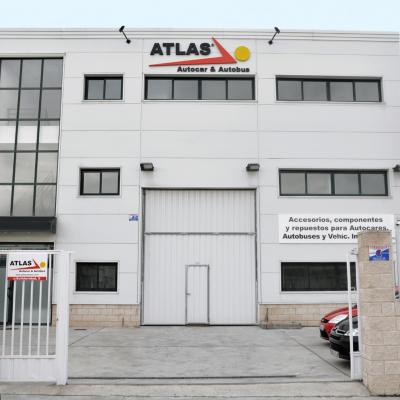 Atlas Bus moves its delegation and store from Madrid Getafe to new facilities.
The delegation, located in the industrial area of Los Olivos, moved on April 2 in the street Solidaridad 9, in the same industrial park. After three years of growth in the city center, Atlas Bus is relocating its facilities to a new, larger store to continue growing.
It has its own parking for light vehicles and a large outdoor area for several buses. The phone numbers and E-mail addresses are the same. For more information, please visit the website www.atlasautobus.com in the Contact section. 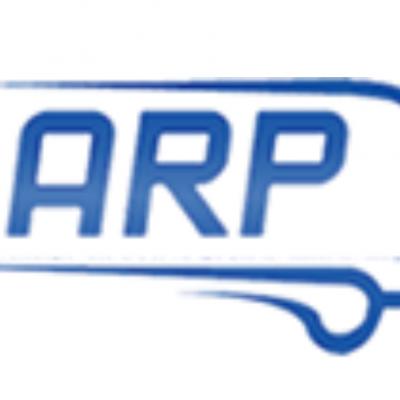 On February 24th and 25th 2018, the XXII Convention of the ARP (Associação Rodoviária de Transportadores Pesados de Passageiros) was held. This time in Penafiel, in the Exe Penafiel Park Hotel & Spa. In the event attended by most of the partners, many sponsors have participated, such as coach brands and bodybuilders, media and auxiliary industry. Atlas Bus was also present, with its representative for the Portugal market Paulo Gomes.

Atlas continues to grow in 2017 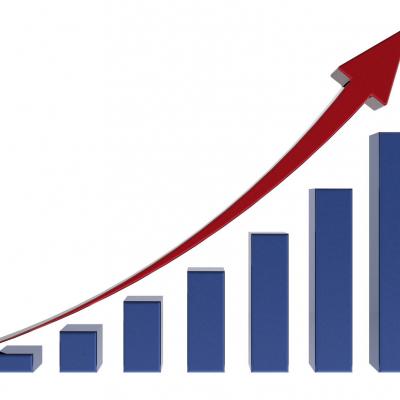 This is the seventh consecutive year than Atlas Bus has increased its turnover.
Established in the sector of spare parts for Buses and Coaches, and specialized in bodywork, Atlas Bus improves the results of the year 2017, by publishing a turnover of 8.7 million Euros, a growth of 13%, a big effort for the company and his team, considering that for seven consecutive years a growth in percentages of two digits.

Exports also increased, assuming 13.5% of their total turnover, in other words it means a 25% increase over 2016 results.

During 2017 many customers remain loyal to them, and new distribution agreements have been concluded with national and international operators. Service has been the key to these results, pieces in stock have been increased and the staff has been strengthened to respond appropriately to the client needs.

The International Shows have also helped to create a network of distributors for different countries, in which Atlas Bus is present, the brand is already firmly established. The growth in Portugal thanks to its agency in Coimbra, has been multiplied by 5.

Tata Hispano, Farebus, BMC or Stacobus, are strategic references in the Atlas catalog. The Atlas warehouses already have large quantities of references in stock for new vehicles in Spain, such as Iveco, Mercedes-Benz, MAN, Neoplan, VDL, TEMSA, and King Long. 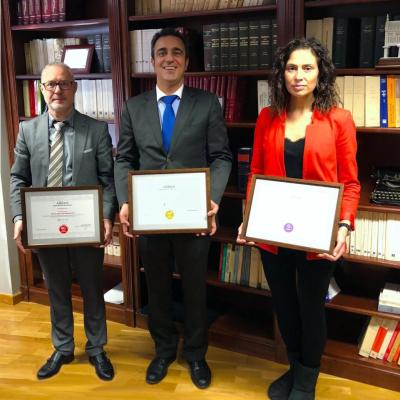 Atlas Bus receives 3 awards ARDÁN, as a result of his professional career.

On October 15, the Zona franca de Vigo Consortium has given the ARDÁN certificates, in recognition for the professional career of the Company.
These certificates are achieved by a methodology that studies 8 indicators annually for tri-annual periods, these are invoicing, productivity, profit, percentile of employee productivity, internationalization, competitive potential, growth rate and innovation.
Among 26,000 Galician companies, only a 6% obtain one of these indicators, so that winning 3 of them is an acknowledgment of the good work, effort and success achieved by Atlas Bus. 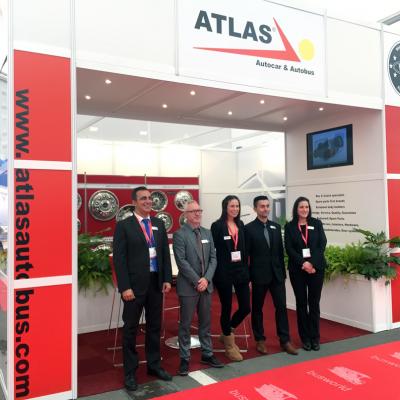 For the second time we have attended Busworld, the most representative fair in our sector. In this edition, the last one in Kortrijk, we have strengthened ties with our customers and suppliers. We present a wide range of entertainment products, as well as WAM Euroliners wheel covers. We value this fair in a positive way, and we commit ourselves to be present at the next edition to be held in Brussels. 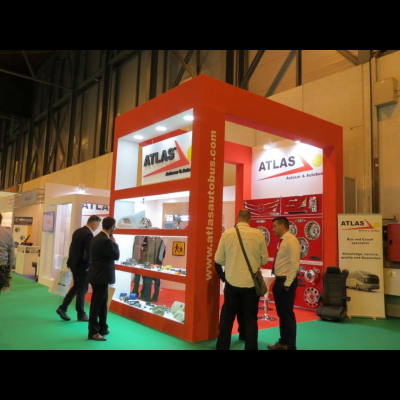 FIAA 2017 a great Show to consolidate relationship with our customers. We have exhibited our news and the new catalogue 2017-2018. 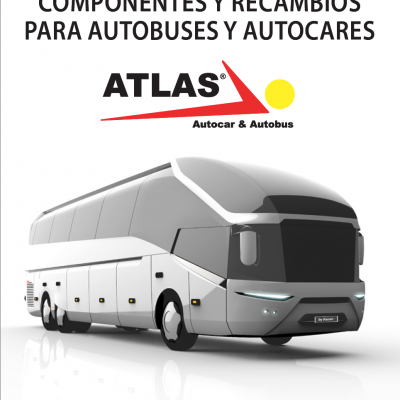 New body spare parts, accesories and components for Bus and Coaches. It's just released 2017 - 2018. Catalog will be available next days at www.atlasautobus.com, IOS Apple store and Android Google Play. Guide products, newest vehicles parts, integral vehicles and everything that's new for your Bus & Coach. Come to visit Us at FIAA Madrid exhibition to know more. 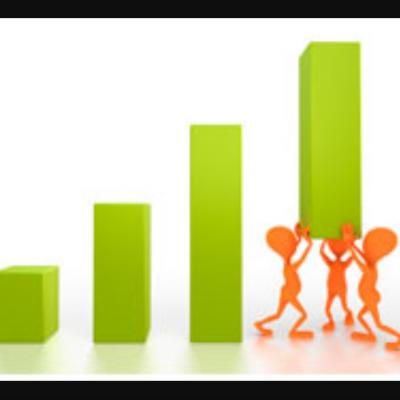 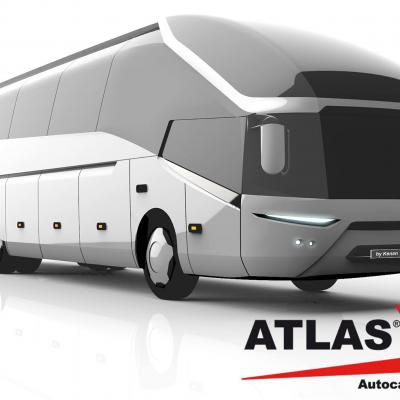 Atlas Bus, a Spanish company specialized in body spare parts and components for Bus and Coach will attend the show FIAA 2017 at the Ifema Exhibition Center in Madrid.
This international fair promotes Atlas in the international market. As we are an Import and Export company we exhibit at this Show to strengthen relations with customers and suppliers. We want to take this opportunity to show all new products from the last 2 years. 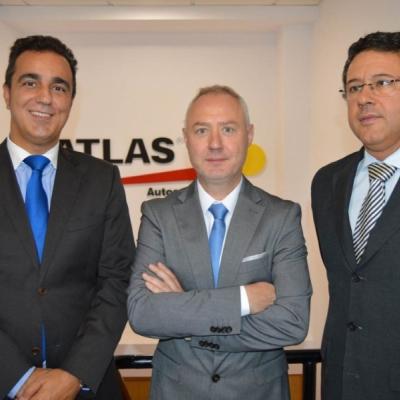 Atlas bus appointed an Agent at Portugal. PFG Lda based in Coimbra will attend the country including Azores and Madeira islands. PFG is a consolidated company, which knows market and products. 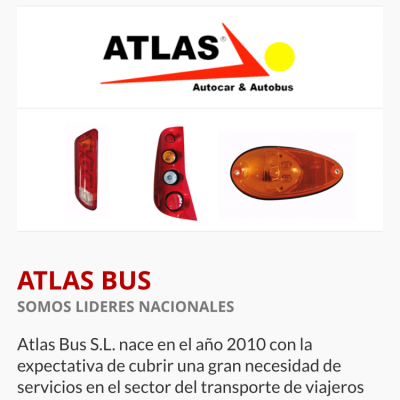 We adapted the web to mobile version. Lighter, faster and with direct access to the catalog and networks. 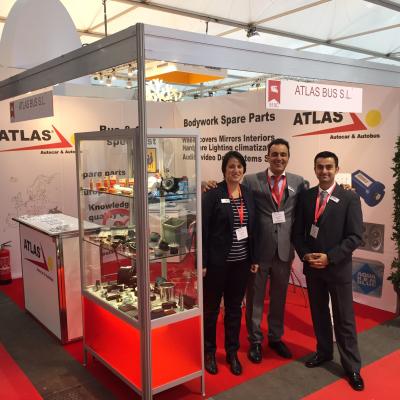 We presented our products at Busworld 2015 in Belgium, the most important fair of our sector. It's been a great success, and contacted many customers and suppliers. Present were working our Director, Manager, Sales Manager, Customer Service, International Department and our partners British firm Wheel And Motion WAM. 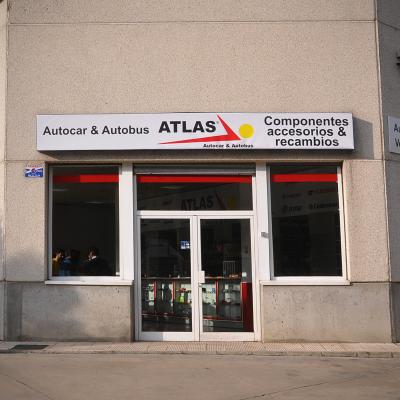 We have open a branch office in Madrid. We will give support to the center and strenghten the service throughout Spain and so synergies are created between warehouses and suppliers. Located in the industrial estate Los Olivos, Calle Calidad 58. Phone 91 357 87 13